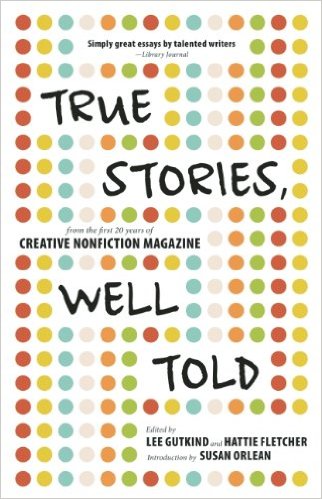 From the First 20 Years of Creative Nonfiction Magazine

Creative nonfiction is the literary equivalent of jazz: it’s a rich mix of flavors, ideas, voices, and techniques—some newly invented, and others as old as writing itself. This collection of 20 gripping, beautifully-written nonfiction narratives is as diverse as the genre Creative Nonfiction magazine has helped popularize. Contributions by Phillip Lopate, Brenda Miller, Carolyn Forche, Toi Derricotte, Lauren Slater and others draw inspiration from everything from healthcare to history, and from monarch butterflies to motherhood. Their stories shed light on how we live.

“An engaging anthology of creative nonfiction from the editors at Creative Nonfiction magazine.

“The magazine is now celebrating its 20th birthday, so when founding editor Gutkind . . . and managing editor Fletcher went to pick a handful of wildflowers from this bounty to fashion this collection, they had plenty to choose from. Many of the pieces have an experimental quality in that they catch something elemental from an unexplored angle as they venture onto shaky ground. The spiciest take no pains to disguise the process of getting there: Readers share the sensory information coming in and witness the writer’s brain decoding and shaping the material, all subjective and unlike any other, making their own local color as both participant and observer and changing their way of being in the world. As a style, creative nonfiction has yet to be thoroughly pinned down; it remains simultaneously furtive and dodgy, versatile and as inclusive as a hug from Walt Whitman. Longtime New Yorker contributor Susan Orlean—who better to write the introduction?—makes important suggestions to writers considering creative nonfiction: “Don’t over-prepare. Be willing to jump into stories naked; you’ll listen harder and learn more authentically. On the other hand, do over-report. Follow bits of the story that aren’t quite on topic; you’ll probably find something unexpected and fascinating.” Other contributors include Sonya Huber, Gordon Lish, Toi Derricotte and Louise DeSalvo. In Vanity Fair, James Wolcott declared that creative nonfiction is “a sickly transfusion, whereby the weakling personal voice of sensitive fiction is inserted into the beery carcass of nonfiction.” This anthology proves otherwise.

“Whether inducing tears or raucous laughter, all the pieces are inviting, inquisitive and attentive—and sure to spark plenty of imaginations.”

Other Books By Lee